This week’s roundup of weird and wacky legal cases features heavily cases involving impaired driving and DUI stops. Why? Because drunk people are often always good for a laugh and for creating new or interesting legal analysis. This week, a man chugged a beer at a DUI stop, while another DUI offender claimed his dog was driving. Finally, just to mix it up, we look at the Wendy’s where it truly was “waaaaaay better than fast food.” 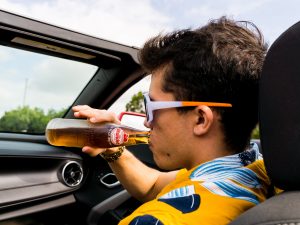 Man Chugs Beer During DUI Stop
Surprisingly, this is an excellent defence to a DUI charge, but a great way to land yourself a charge of obstruction. After a short police chase, Daryl Reidel hopped out of his car and chugged a beer right in front of police officers who were attempting to arrest him for a DUI investigation. Lucky for Mr. Reidel, that beer was clearly not in his system at the time he drove, but would be when blood or breath tests were taken. This type of conduct tends to render the results inadmissible and unreliable.

Additionally, the use of a roadside breath tester would have to be delayed due to his recent consumption of alcohol, buying Mr. Reidel time to think of a better escape plan or who to call for bail money. I wouldn’t recommend this approach. Mr. Reidel is now facing three felony and two misdemeanor charges, while a Canadian RCMP officer who tried a similar action ended up convicted of obstruction of justice.

Oh, and in case you were wondering, Mr. Reidel is from Florida.

Man Tells Police His Dog Was Driving
Look, we’ve all been so drunk that we thought our dog should drive, but very few people have ever suggested to the police that this was the case. Sadly, Mr. Scott Garrett out of — you guessed it — Florida, thought that this was a good line to use. Unsurprisingly, it did not work.

And while “my friend was driving” might be a good defence in some circumstances, it’s hard to imagine how the little dog paws even were able to reach the pedals. Which may, actually, explain how Mr. Garrett’s driving was poor enough to attract the attention of police. But it wasn’t the case. Probably due in large part to the fact that Mr. Garrett was, according to police, alone in the vehicle.

Breaking Wendy’s
One tell that police officers usually look for in determining whether a residence is a suspected “crack shack” is that there are multiple people coming and leaving after only a short stay. Where else do people come in, stay a few minutes, and leave with a suspiciously wrapped package? A fast food restaurant.

In some respects, the meth ring operating out of Wendy’s was genius in its simplicity. No one would find anything suspicious about people coming and going from a fast food joint, and leaving with packages that are wrapped in brown paper bags or folded into white paper. And yet somehow, the police caught onto the fact that this Wendy’s was being used by four of its employees as a methamphetamine sales counter. Which just goes to show you that no matter how clever a drug dealing plan seems to be, the police are likely to figure it out, sorry to say.

Scroll to Top CALL ME NOW